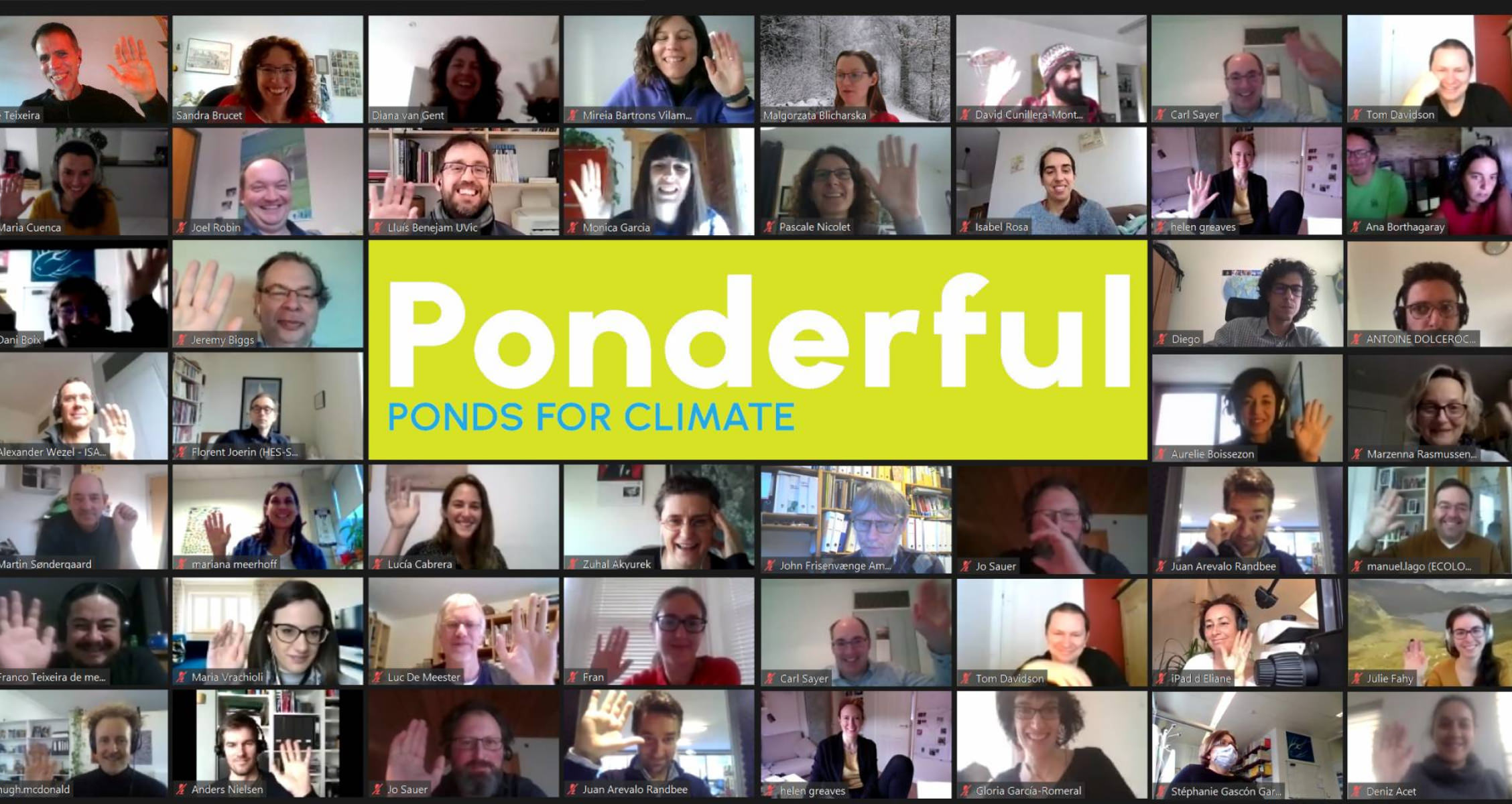 Today see’s the first meeting of the Ponderful project funded by the EU’s Horizon 2020 research programme. Led by the University of Vic in Spain, Ponderful’s overall aim is to develop better methods.

Kick Off meeting of Ponderful happened online during this week and we are all very inspired to start this European research project funded by EU Horizon H2020 Programme.

The project aims to increase the understanding of the ways in which ponds, as a Nature-Based Solution (NBS), can help society to mitigate and adapt to climate change, protect biodiversity and deliver ecosystem services.

The project started in December 2020, and will run for 4 years.

Today see’s the first meeting of the Ponderful project funded by the EU’s Horizon 2020 research programme. Led by the University of Vic in Spain, Ponderful’s overall aim is to develop better methods for maximising the use of ponds and pondscapes in climate change adaptation and mitigation, biodiversity conservation and the delivery of ecosystem services.

Because of their small size, the significance of ponds has long been underestimated. They are, for example, largely excluded from Europe’s most important water legislation, the Water Framework Directive in Europe, even though the Directive is actually intended to protect ‘all waters’. In North America, their inclusion in the protections provided by the Clean Water Act are contested, and in other areas they lie largely outside regulatory systems. However, research over the last 10-15 years has shown that, because of their abundance, heterogeneity, exceptional biodiversity, inherent naturalness and biogeochemical potency, ponds play a role in catchments, landscapes, and potentially at continental scale which is completely out of proportion to their small size, and there is growing awareness amongst researchers and others of their importance[1].

The main aims of the research in PONDERFUL will be to increase understanding of the ways in which ponds, as a Nature-Based Solution (NBS), can help society to mitigate and adapt to climate change, protect biodiversity and deliver ecosystem services. The project started in December 2020, and will run for 4 years.

During the first week in February, the whole project team is meeting together for the first time to plan the continent-wide project’s five main components:

The project brings together experienced researchers from nine European states and from Turkey and Uruguay.

The last 20 years has seen a revolution in scientific opinion about which freshwater habitats are the most important for biodiversity. Traditionally, it was assumed that large habitats – rivers and lakes – were key. Recent science has turned this idea on its head: small sites have proved to be critical biodiversity hotspots and a vital refuge for rare wetland plants and animals[2]. It is increasingly clear that they also play an important part in providing ‘ecosystem services’ and can influence the climate too.

There is worrying evidence from the UK that biodiversity in small sites may be declining faster than in larger waters[3] caused by a mixture of pollution and poor management. Since tiny ponds and streams are often the only freshwater habitats in countryside landscapes, there is concern that their decline will lead to unprecedented loss of freshwater biodiversity on a landscape scale. In other parts of Europe we do not know if there are similar trends but it seems quite possible that similar deterioration could be occurring.

On the plus side, restoring small habitats offers major benefits: these sites pack a big bang for their buck: providing major biodiversity gains with only modest expenditure. Creating new clean water ponds, rewetting small fens and de-intensifying land around headwater streams are all cheap and effective options, bringing biodiversity benefits out of all proportion to size of these habitats.

For example, last year UK members of the project team, from Freshwater Habitats Trust, found that adding just 20 new ponds in a 10 km2 area of farmland – roughly doubling pond density per kilometre square – protected the entire area against loss of freshwater biodiversity, and brought back rare plant species that had not been seen for decades: https://www.bbc.co.uk/news/uk-england-leicestershire-52910464.

Professor Sandra Brucet (University of Vic) said: We are very happy to start the Ponderful project with our ‘Kick-off Meeting’ the first time we have brought all of our partners together to plan the project work in detail. We hope that our work will, as well as providing new knowledge of the role of ponds, also help international planning to protect freshwater biodiversity and mitigate the effects of climate change”.

Dr Jeremy Biggs of the UKs Freshwater Habitats Trust, who is co-ordinating project communications said: “Ponderful will be important in helping policy makers and governments respond better to the biodiversity crisis, which is especially acute”.

[2]Surprisingly, in most landscapes where scientists have looked, ponds support more species collectively than other freshwater habitats. Key reference: https://www.sciencedirect.com/science/article/pii/S0006320703001538.

[3]Recent UK government evidence shows that river and lake quality has flat-lined over the last 10 years (see Indicator B7 here: https://jncc.gov.uk/our-work/ukbi-b7-surface-water-status/). In contrast, small waters still seem to be declining and, at a landscape scale, headwater streams are losing species (see https://freshwaterhabitats.org.uk/wp-content/uploads/2019/05/NPS-resurvey-summary-results-1JB.pptx and https://www.sciencedirect.com/science/article/pii/S0006320719310626).